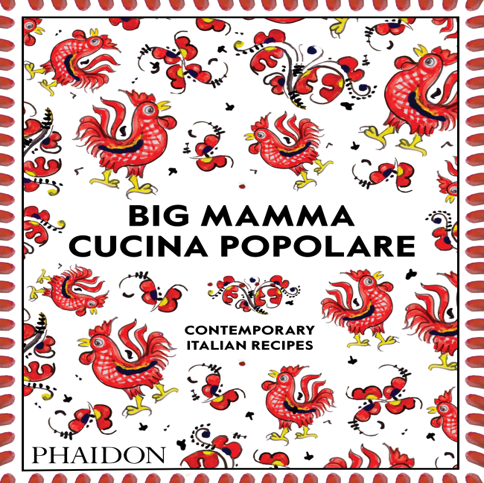 The book features 130 of the Big Mamma team’s favourite recipes, including some delicious & imaginative twists on classics such as ‘La Gran Carbonara’ and ‘Tigramisu’; to some of the crazy creative recipes, including ‘Pizza Nera Con Cozze’ and ‘Sfoglia Lasagna’ (the lavish open lasagne). The book includes much-loved dishes from London’s legendary Gloria and Circolo Popolare, as well as from their other restaurants.

With a focus on simple techniques with clever twists, plus tips from the Big Mamma chefs, Big Mamma Cucina Popolare is a vibrant, exciting, and contemporary spin on traditional Italian dishes. The book’s design is based on the brightly coloured hand-painted ceramics from Fima Deruta that are so loved in all of Big Mamma’s restaurants.

The famed Italian group burst onto the London food scene to critical acclaim earlier this year with the opening of Gloria, the 70’s Capri-style trattoria in the heart of Shoreditch. The unforgettable launch was followed by the opening of their second UK restaurant, Circolo Popolare, a sunny slice of Sicily in Fitzrovia. They also boast eight restaurants in France, including La Felicità, a 50,000 sq ft food market in Paris, and Libertino, due to open in Paris on the 6th December.

In Paris, the Big Mamma family incorporates soon to open Libertino in the 10th arr., as well as East Mamma, Ober Mamma, Mamma Primi, BigLove, Pink Mamma, Popolare and La Felicitá in Station F, an Italian food hall with 1,500 covers. While they opened La Bellezza, in Lille, in September 2018. In February 2019, they opened their first London restaurant, Gloria in Shoreditch, and shortly after in June 2019 they opened Circolo Popolare in Fitzrovia. The restaurants welcome 8,000 customers a day, with more than 600 employees, of which half are in the kitchen ensuring everything is homemade, from the fresh pasta at Mamma Primi to Popolare’s craft beer.

Victor Lugger and Tigrane Seydoux, the two founders, had this dream 6 years ago – to offer a very good and authentic Italian food, at an Italian price, in atypical places with stunning designs. The restaurants are famed in France for their iconic queues around the block, for their 100% homemade and generous food, smiles and the vibe of a crazy and charming young Italian team.